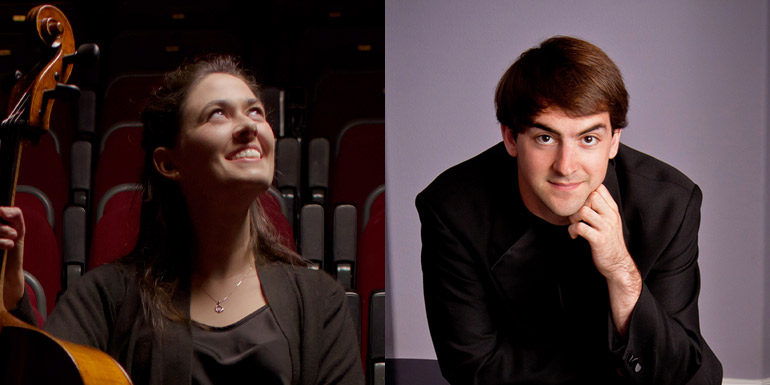 Irish cellist Aoife Burke leads a diverse career as a recitalist, chamber musician, orchestral player, curator and producer. Selected by the Arts Council as a recipient of a Next Generation Artist Bursary in 2020, Aoife is a member of the Opalio Piano Trio and the Banbha String Quartet, supported by the National String Quartet Foundation.

An avid chamber musician, Aoife has collaborated with The Vanbrugh, the ConTempo String Quartet and the Gavin Bryars, Kirkos, Ficino and Crash Ensembles, and has performed at numerous international music festivals, including the National Concert Hall’s Chamber Music Gathering, NCH Perspectives Series, West Cork Chamber Music Festival, Music in Drumcliffe, New Music Dublin, Cantiere Internazionale d’Arte di Montepulciano, the Aurora Chamber Music Festival (Sweden) and Barry Douglas’ Clandeboye Festival, where she was awarded the Special Festival Prize. Her love for chamber music was fostered, in tandem with many other influences, during a Chamber Studio mentorship with Richard Lester at King’s Place, London. Her numerous national prizes and awards include the RTÉ Lyric FM Award, Hazel de Courcy Lewis Cup, Bach Prize and Clyde Twelvetrees Cup at Feis Ceoil, Dublin and the Capuchin Order Perpetual Cup and Bursary at Feis Maitiú, Cork. Aoife has appeared as soloist with orchestra several times both at home and abroad. Her début with the New York Concerti Sinfonietta in Carnegie Hall’s Weill Recital Hall in 2016 was described as “a thing of beauty…intelligent, poised, and refined” (The Epoch Times).

Aoife studied at undergraduate level with Emma Ferrand at the Royal Northern College of Music in Manchester, graduating in 2014 with a first-class honours Bachelor of Music degree and an LRSM Diploma in Performance with Distinction. For her third year, she undertook an Erasmus study exchange to the Folkwang Universität der Künste in Essen, Germany, where she joined the cello class of Christoph Richter and the chamber music class of Andreas Reiner. During the course of her studies, Aoife won the Raphael Sommer Music Scholarship and partook in the Britten-Pears Young Artist Programme. She has participated in masterclasses with such renowned cellists as Raphael Wallfisch, Ralph Kirshbaum, Miklós Perényi and Frans Helmerson. Aoife subsequently obtained a Master’s Degree in Arts with Distinction from the CIT Cork School of Music, where she studied under Christopher Marwood, and pursued further study on the Performance Certificate Course (Corso di Perfezionamento) at the Scuola di Musica di Fiesole, Italy, with Paolo Bonomini and Francesco Dillon.

Alexander Bernstein has performed in 16 countries across the US, Europe and Asia. Alexander has earned top prizes from international competitions in the US, Ireland, Austria, Germany, and Italy. He also attended numerous summer festivals and was the pianist for the resident new music ensembles at the Aspen Music Festival and Tanglewood Music Centre. As a devotee of new music, he also recorded a CD of solo piano works by the Irish composer, Ryan Molloy.

Alexander has recently been named the new full-time professor of piano at Shenandoah Conservatory at Shenandoah University in Winchester, Virginia. In addition to a full teaching schedule, this concert season includes solo and concerto performances in Virginia, North Carolina, Maryland, New York, Washington State, Ireland and Northern Ireland, and a tour of Chile with the Shenandoah Conservatory Symphony Orchestra. Along with those performances will be masterclasses, outreach programs, and composition workshops designed to bring pianists and composers together.