Aoife Burke and Sabine Ducrot – LIVE at Triskel | Triskel Christchurch
We are committed to the Health & Safety of our staff and audiences. And we are operating under the agreed protocols described under "Guidance documents for the Safe Operations of Cinemas during COVID-19 Resilience and Recovery 2020-2021", a copy of which can be found here.
Live Music
Cinema
Visual Art
Festivals
Education
Special Events 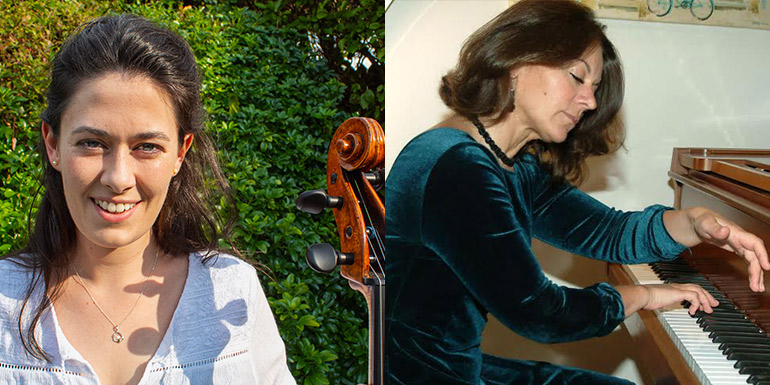 Pianist and flautist Sabine Ducrot has appeared as a soloist with some of France’s leading orchestras, including the Orchestre de Paris, the Orchestre National de France and the Orchestre de Radio France. She has performed at major international venues, in particular in Paris, in Salle Pleyel, Théâtre des Champs-Elysées, Salle Gaveau and Salle Cortot. She has recorded and performed live broadcasts for French radio and television and for RTÉ Lyric FM. Sabine qualified at the prestigious Conservatoire National Supérieur de Musique in Paris where she was the first student in the history of the conservatoire to be accepted on two principal instruments, and qualified with the coveted Premier Prix on both.

As a pianist, she has collaborated with Michael Joyce; together they have toured as a piano duo and in 2012 gave performances throughout Ireland of Stravinsky’s Rite of Spring for piano four hands with dancers from the Fidget Feet Dance Company. In 2019, they toured to Russia, performing in St Petersburg with Breandán de Gallaí and the Ériu Dance Company with support from The Arts Council, Music Network (Performance and Touring Award) and Culture Ireland. Sabine has performed regularly in Ireland, at the National Concert Hall, Dublin, Glór, Ennis, Castalia Hall, Kilkenny, Christchurch Cathedral, Waterford and Triskel Arts Centre, Cork, and abroad in London, Paris, Cologne, Spain and Italy.

In Ireland, Sabine has collaborated with Katherine Hunka (Leader of Irish Chamber Orchestra) as part of the Crawford Art Gallery’s Summer Lunchtime Concert Series, and London-based flautist Fiona Kelly, and violist Ed Creedon in the Cork Orchestral Society Series, amongst others. She has also performed with her two sons Eoin Ducrot and Cian Ducrot at the Triskel Arts Centre, the RDS, Dublin and at St Barrahane’s Church Music Festival.

Sabine currently lives in Cork where she is a lecturer in Piano and Flute Performance at the CIT Cork School of Music.

Selected by The Arts Council as a Next Generation Artist 2020, Aoife Burke’s numerous national prizes and awards include the Senior Cello Award, Bach Prize, Clyde Twelvetrees Cup, RTÉ Lyric FM Award and Hazel de Courcy Lewis Cup at Feis Ceoil, Dublin, and the Capuchin Order Perpetual Cup and Bursary at Feis Maitiú, Cork. Aoife studied with Emma Ferrand at the Royal Northern College of Music and with Christoph Richter at the Folkwang Universität der Künste, graduating with a first-class BMus. (Hons.) and an LRSM Diploma in Performance with Distinction in 2014. During her studies, Aoife was awarded the Raphael Sommer Music Scholarship and partook in the Britten-Pears Young Artist Programme. She was subsequently awarded a first-class Master of Arts from the CIT Cork School of Music, where she studied under Christopher Marwood.

Aoife performs regularly at venues and festivals in Ireland and further afield, including at the West Cork Chamber Music Festival, New Music Dublin, the NCH Chamber Music Gathering, the NCH Perspectives Series and the Clandeboye Festival, where she was awarded the Special Festival Prize. She has collaborated with The Vanbrugh, the ConTempo String Quartet and the Gavin Bryars, Kirkos, Ficino and Crash Ensembles and has appeared in recital as part of the Crawford Art Gallery’s Summer Lunchtime Concert Series, Music for Wexford Series, Castletown House Concert Series and The Hugh Lane Gallery Sundays@Noon Concert Series, among others. An avid chamber musician, Aoife undertook a Chamber Studio Mentorship with the Shandon String Trio under Richard Lester at King’s Place, London, in 2018 and she currently holds a residency at the Triskel Arts Centre, where she curates the Spotlight Chamber Music Series.

Upcoming projects include a national tour of Beethoven quartets with the Banbha String Quartet, supported by the National String Quartet Foundation. Aoife gratefully acknowledges the generous support of EMI Music Sound Foundation, Dún Laoghaire-Rathdown County Council, The Arts Council and Music Network’s Music Capital Scheme, funded by The Department of Culture, Heritage and the Gaeltacht. Music Network is funded by The Arts Council.