Another Round | Triskel Arts Centre
We are committed to the Health & Safety of our staff and audiences. And we are operating under the agreed protocols described under "Guidance documents for the Safe Operations of Cinemas during COVID-19 Resilience and Recovery 2020-2021", a copy of which can be found here.
Live Music
Cinema
Visual Art
Festivals
Education
Special Events 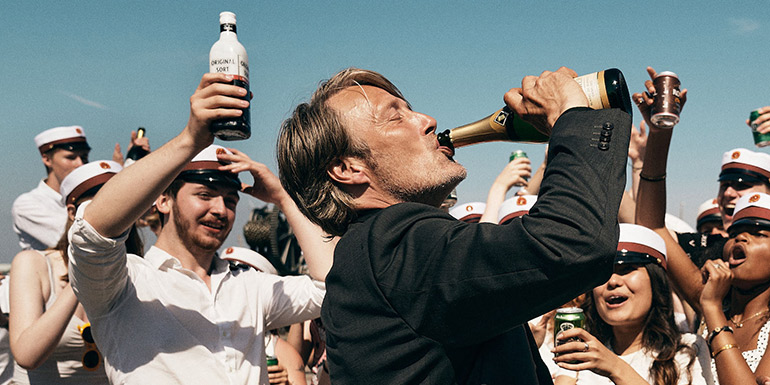 Triskel Arts Centre is delighted to be taking part in the 4th European Cinema Night. Europa Cinemas has joined forces with the MEDIA Programme of the European Commission to celebrate the richness and diversity of European cinema and to raise audience awareness of how MEDIA supports Europe’s film industry and culture.

For this occasion, there will be a special free screening of Another Round, the black comedy drama from the filmmaker who brought you The Celebration, Dear Wendy and The Hunt.

There is an obscure philosophical theory that humans should have been born with a small amount of alcohol in our blood; that modest inebriation opens our minds to the world around us, diminishing problems and increasing creativity. Intrigued, Martin (Mads Mikkelsen) and three of his friends, all weary high school teachers, embark on a risky experiment to maintain a constant level of intoxication throughout the workday. Initial results are positive, but as the units are knocked back and stakes are raised, it becomes increasingly clear that some bold acts carry severe consequences.

This special preview screening of Another Round (presented as part of European Cinema Night) is free but ticketed.