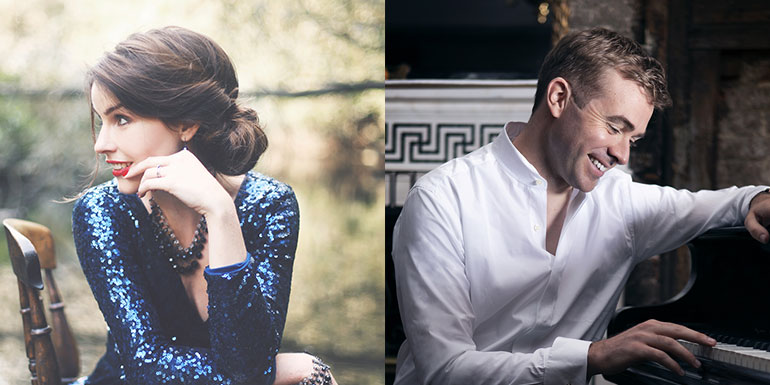 The second concert in the Spotlight Chamber Music Series 2022 will see soprano Anna Devin give a recital in duo partnership with pianist Fiachra Garvey. Their programme comprises lieder from two nineteenth century composers – Edvard Grieg from Norway and Hugo Wolf from Austria – along with an assortment of the most beloved Christmas carols.

Irish soprano Anna Devin is widely admired for her “vocal control, artistry and musico-dramatic intelligence” (Opera News). An alumna of the Royal Opera House’s Jette Parker Young Artist Programme, the Royal Irish Academy of Music, the Guildhall School of Music and Drama and the National Opera Studio, Ms Devin has gained recognition across the world for her work in the Baroque and Bel Canto repertoire.

In 2022-23, Anna will perform the title role in Lucia di Lammermoor in Hamburg as well as Fiordiligi in Così fan tutte with Irish National Opera.

In recent years, Anna’s successes have included Elisabetta in Maria Stuarda with Irish National Opera; Almirena in Rinaldo with Glyndebourne on tour and Michal in Saul in Paris’ Théâtre du Châtelet; Melissa in Amadigi with Garsington Opera; Celia in Lucio Silla in Madrid; the title role of Semele with the Händel-Festspiele; Tusnelda in Arminio at the International Handel Festival in Göttingen; Michal in Saul at Glyndebourne and Cleopatra in Giulio Cesare for the Early Opera Company, in which her Cleopatra was described as “one of the finest London has heard” (Opera Magazine). She has sung Galatea in Acis and Galatea for Mozartwoche Salzburg; the title role in Handel’s Rodelinda with the Moscow Philharmonic; Nannetta in Falstaff and Lauretta in Gianni Schicchi for Covent Garden; Susanna in Le Nozze di Figaro for Welsh National Opera, Glyndebourne Tour and Scottish Opera; Sophie in Werther and Zerlina in Don Giovanni for Scottish Opera; la bergère Louis XV and la chauve-souris in L’enfant et les sortilèges for La Scala; Poppea in Agrippina for Opera Collective, Ireland; and Clotilde in Faramondo for Brisbane Baroque, which earned her the Best Supporting Singer in an Opera at the 2015 Helpmann Awards, Australia.

When not on stage, she is a keen runner and enjoys keeping fit and relaxing with her husband, two daughters and a Norwegian Forest Cat in their Bedfordshire home.

Wicklow born pianist Fiachra Garvey is possessed of a maturity and profound understanding of his art, which when combined with his infectious enthusiasm for music-making, has already captivated audiences in concert halls across Europe and beyond.

First prize-winner at the 2012 Jaques Samuel Competition, London, Fiachra has performed in venues from the Fazioli Auditorium in Italy to London’s Wigmore Hall. He has also been a prize-winner at AXA Dublin International Piano Competition, EU Prague and the Soirees-Concours Internationales de Piano à Collioure, France. The NCH awarded Fiachra the “Rising Star” prize in 2011, which subsequently led to a series of concerto and solo debuts.

Fiachra has recorded and broadcast for BBC and RTÉ television and radio and has released two solo albums, “For the Piano” (RTÉ Lyric fm label) and a Live from Wigmore Hall disc.

As a keen entrepreneur Fiachra is the Founder and Artistic Director of both the West Wicklow Chamber Music Festival and Classical Vauxhall.

When not performing, Fiachra loves nothing more than returning home to help on the family farm with the yearly lambing, dipping, shearing, harvesting and all the other elegant and refined activities on the farm! Fiachra feels this makes him a more inspired and fulfilled musician.

The Spotlight Chamber Music Series returns to Triskel this Autumn/Winter. This popular lunchtime series is based on the principle of bringing together some of Ireland’s most dynamic and distinguished musicians to play with one another in small ensembles. Funded by the Arts Council and supported by Triskel, these concerts showcase a wide range of repertoire and a variety of instrumental formations.