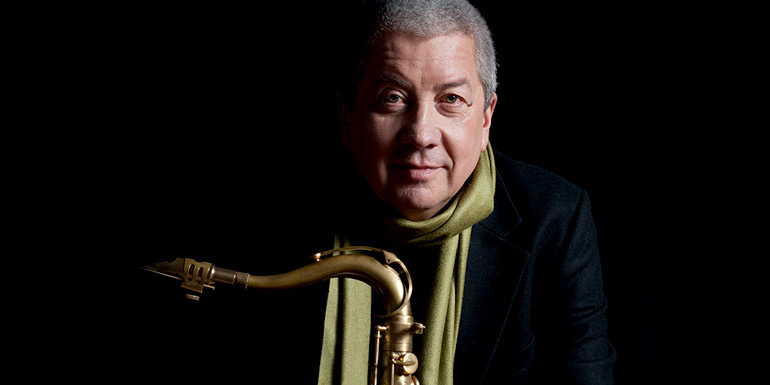 The new project Andy Sheppard East Coast, led by the saxophonist, sees Sheppard inviting three of the most innovative instrumentalists at work today on the UK’s and Portuguese jazz scene: John Parricelli on guitars, Dudley Philips on double bass and Mário Costa on drums.

The music explores new grounds for Sheppard’s melodic inventiveness, anchored in inspirational coastal landscapes and sounds, it is perfectly fitting that its UK premiere was at First Light Festival, celebrating one cycle of midsummer sun setting and rising over the beach in England’s most easterly town.

Innovative but lyrical, sometimes ethereal but always ready to groove, grounded in tradition but free from boundaries, where the contrasts between all the different elements converge in an ongoing moment in time. A group of four distinctive musicians seeking to connect through the synergy of diverse musical languages infused with a greater sense of openness in the making.

An ECM recording artist, bandleader and composer, Andy Sheppard is one of Europe’s leading saxophonists and one of a very few British musicians to have made a significant impact on the international jazz scene, performing all over the world, touring in Europe, USA, Africa, South America, Canada, Australia, Scandinavia, India, Russia, Middle East and Asia.

Quoting the iconic producer and label founder Manfred Eicher “I just need to hear one note… to know it’s Andy”. It is Sheppard’s distinctive sound and approach to the saxophone that led him to play, collaborate and record with many great jazz masters, including three of the seminal composers in contemporary jazz – Carla Bley, George Russell and Gil Evans.

As a leader, Sheppard has released highly acclaimed albums on many labels including Antilles/Island Records, Blue Note and Verve to name a few. Throughout his own musical career and recorded output, he surrounded himself with musicians such as Steve Swallow, Naná Vasconcelos, Arild Andersen, Rita Marcotulli, Eivind Aarset, Joanna MacGregor, Kuljit Bhamra, Han Bennink – just a few examples of a long list of incredible talent that has led Sheppard’s music to international acclaim. Consequently, his writing talents have become increasingly in demand, ranging from composing for film to big bands and mass community projects. With such a long-standing international career, spanning over four decades, it becomes difficult to reference every recording and collaboration Sheppard has been involved with. His achievements have gained him numerous accolades over the years, from Best Instrumentalist at the British Jazz Awards in 1989 to European Jazz Musician of the Year in 2016.

Sheppard found what he calls “his spiritual home” on ECM over 10 years ago and has since released four highly acclaimed albums on the label: Movements in Colour (2008), Trio Libero (2012), Surrounded by Sea (2015) and Romaria (2018). As well as other releases on ECM with the long established trio lead by NEA Jazz Master Carla Bley with legendary bass player Steve Swallow: Trios (2013), Andando el Tiempo (2016) and Life Goes On (2020).

John Parricelli began playing guitar professionally in the mid-80s. He was a founder member of the acclaimed British big band Loose Tubes, recording three albums and touring throughout the world. Since then he has been active as a jazz musician, a studio player and a composer. He has toured and recorded with numerous artists in contemporary jazz, including Kenny Wheeler, Charlie Haden, Peter Erskine, Andy Sheppard, Lars Danielsson, Paul Motian, Norma Winstone, Iain Ballamy, Lee Konitz and Mark Lockheart amongst many others. He has performed Mark Anthony Turnage’s “Blood on the Floor” throughout Europe and in the USA, and “Anna Nicole” at it’s premiere at the Royal Opera House in London.

Parricelli is much in demand for work outside jazz, recording with Annie Lennox, Goldfrapp, Rumer, Robbie Williams, Judy Tzuke, Ed Sheehan, Thomas Dolby, Katie Melua, Chris Difford and Mike Oldfield amongst others. He has also worked on many film scores, including Skyfall, The Constant Gardener, Lord of the Rings, Shakespeare in Love, The Hunger Games, The Fantastic Mister Fox and Finding Neverland.

Playing both electric and double bass, Philips is a creative musician working in the fields of jazz, folk / ‘world’ music, contemporary songwriting and film music. However, Dudley Philips prefers not to place music into categories and believes genre labelling is many times unnecessary.

It is not surprising that Dudley Philips has been for many years one of Britain’s most in demand bass players, his versatility and ability to flow seemingly through any musical language is clearly noticeable and a refreshing experience for the listener.

Beginning his career as a jazz drummer in the city of Porto. He finished his graduation in Jazz – Drums at ESMAE – School of Music and Performing Arts in 2008 with Professor Michael Lauren, moving latter to New York where he had classes with some of the most renowned musicians in the Jazz scene. In 2010 is invited by renowned concert hall “Casa da Música” to present a project, creating his group “Mário Costa – Homo Sapiens”, where begun his relationship with saxophonist Emile Parisien.

With the recording of double bassist Hugo Carvalhais’s albums, Costa is introduced to the national and international critic and has the opportunity to collaborate and perform with saxophonists Tim Berne, Emile Parisien and Liudas Mockunas, pianist Gabriel Pinto and violinist Dominique Pifarély.

In 2015 he is invited to join the new project of European jazz revelation Emile Parisien, alongside the legendary Michel Portal and Joachim Kuhn, debuting this group at the acclaimed festival “Jazz in Marciac 2015”. In 2016 this project releases its first album ” Sfumato” (ACT), awarded and acclaimed by international critics. This ensemble has since appeared in the most prestigious jazz festivals and venues in Europe, bringing together some of the most renowned musicians in the international scene such as: Wynton Marsalis, Bruno Chevillon, Manu Codjia, Vincent Peirani, Michael Wollny, Roberto Negro, Theo Ceccaldi, Simon Tailleu, Pierre Perchaud, among others.

Mário Costa is currently touring his “OXY PATINA” album (Cleanfeed 2018), recorded with Marc Ducret on guitar and Benoit Delbecq on piano and electronics; his debut as a composer, which, in addition to numerous international reviews, received the five stars by Jazz.pt magazine which awarded him the titles of “best album of the year” and “national jazz musician of the year”.