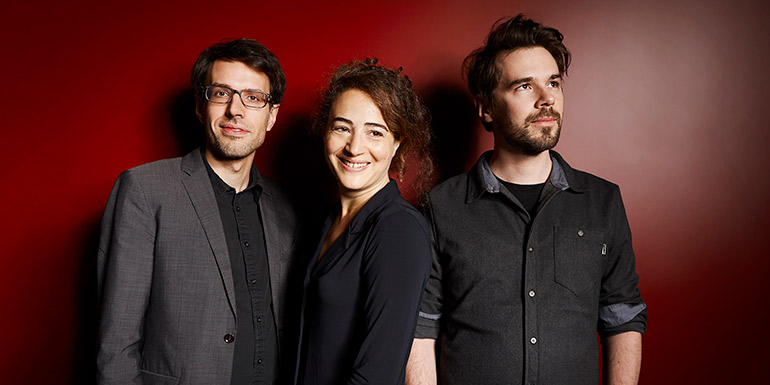 Leading the new wave of young European improvising trumpeters, Airelle Besson is a formidable, compelling and, frankly, astonishing talent. Sometimes embracing a baroque sense of form and lyricism, she can turn on a sixpence and send forth grooves that mark her out as a fine jazz presence and a thoughtful and articulate composer. With the elegant and lucid playing of pianist Sebastian Sternal and drummer Jonas Burgwinkel bringing his classic jazz and avant garde sensibilities to the table, this is a trio whose music is both considered and free, communicative and compelling. Listening to each other and to the moment, they build an architecture of eloquent and clean sound, without clutter, but with masses of heart.

2015 and 2016 were exceptional years for Airelle Besson; awarded twice, as Best French Musician of the Year by the French Django Reinhardt Award Academy and as Jazz Revelation of the Year at the French Award ceremony “Les Victoires du Jazz”.  At the 2015 festival ‘Jazz sous les Pommiers’ in Coutances, where she was artist in residence for three years, Airelle caught the public’s attention with her brand new project – a quartet with Isabel Sörling on vocals, Benjamin Moussay on piano, fender Rhodes & bass synth and Fabrice Moreau on drums. Their new album Radio One was released in May 2016 on label Naïve and concerts in France and worldwide followed the release.

With his trio he released two albums, Eins (2009) and Paris (2010), and he plays in the quartet Die Verwandlung of trumpet player Frederik Köster and in duo with saxophone players Claudius Valk and Will Vinson (New York). His project ‘Sternal Symphonic Society’ (Traumton Records 2012) brings together outstanding young musicians from both classical and jazz backgrounds in an 11-piece ‘symphonic combo’.

Jonas Burgwinkel is an outstanding jazz drummer, internationally sought after for his unique style of playing. He innovatively blends classic jazz with avant-garde improvisation. He has received numerous jazz awards, including from Südwestrundfunk and Westdeutscher Rundfunk, and the ECHO Best Soloist Award at the North Sea Jazz Festival in 2012. There are over 50 CDs and countless radio and television recordings which document the success of his musical work. He is one of the leading young percussion players of the European Jazzscene.

In addition to his concert career Jonas Burgwinkel is involved as a co-founder of the Cologne jazz collective KLAENG as a concert promoter, with intensive networking and its own label.