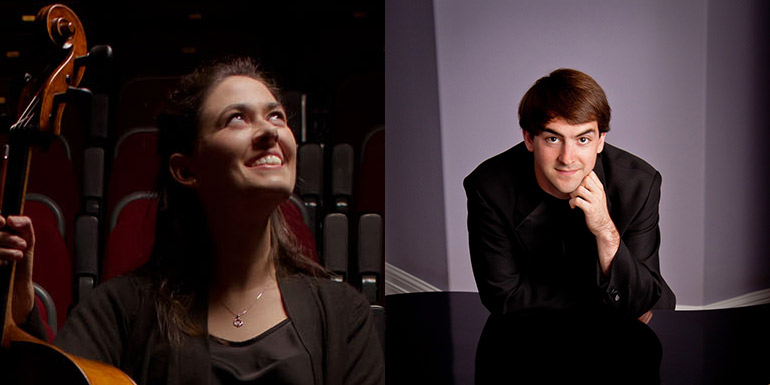 For the fourth of the 6 Summertime Concerts at Triskel, cellist Aoife Burke and pianist Alexander Bernstein present a programme of staple cello and piano repertoire, comprising the last of Beethoven’s five cello sonatas and Rachmaninoff’s mystic and passionate work for the same combination.

Rachmaninoff – Sonata for Cello and Piano in G minor, Op. 19

Cork native Aoife Burke leads a diverse career as a recitalist, chamber musician, orchestral player, curator and producer. Selected by the Arts Council as a recipient of a Next Generation Artist Bursary 2020, Aoife is a member of the Opalio Piano Trio and the Banbha String Quartet, supported by the National String Quartet Foundation.

Aoife studied at undergraduate level with Emma Ferrand at the Royal Northern College of Music in Manchester, graduating in 2014 with a first-class honours Bachelor of Music degree and an LRSM Diploma in Performance with Distinction. For her third year, she undertook an Erasmus study exchange to the Folkwang Universität der Künste in Essen, Germany, where she joined the cello class of Christoph Richter and the chamber music class of Andreas Reiner. During the course of her studies, Aoife won the Raphael Sommer Music Scholarship and partook in the Britten-Pears Young Artist Programme. She has participated in masterclasses with such renowned cellists as Raphael Wallfisch, Ralph Kirshbaum, Miklós Perényi and Frans Helmerson. Aoife subsequently obtained a Master of Arts with Distinction from the CIT Cork School of Music, where she studied under Christopher Marwood, and pursued further study on the Performance Certificate Course (Corso di Perfezionamento) at the Scuola di Musica di Fiesole, Italy, with Paolo Bonomini and Francesco Dillon.

Alexander Bernstein, a San Francisco native, began piano lessons at age seven, later moving to Walla Walla, Washington, where he studied for nine years. Bernstein received a Bachelor of Music from Harvard University in May 2010, where he studied privately with both Patricia Zander and Stephen Drury of the New England Conservatory. He also completed a master’s degree in piano performance at the Royal Irish Academy of Music in Dublin in 2012. He completed his Artist Diploma at Shenandoah Conservatory under the tutelage of John O’Conor in 2016.

After making his symphonic debut in 1999, Bernstein has performed concerti with orchestras in the United States and Europe, most recently including performances of Rachmaninoff’s Concerto No. 3 with the RTÉ National Symphony Orchestra and the Shenandoah Conservatory Symphony Orchestra in Virginia, U.S.A. He has given solo recitals in the United States, Canada, Ireland, the U.K., Germany, Italy and Romania.

Bernstein is an avid devotee of new music, studying and premiering works of living composers as well as Berio, Ligeti, Ives, and Cage. In September 2015, he recorded a solo CD of works by the Irish composer Ryan Molloy.