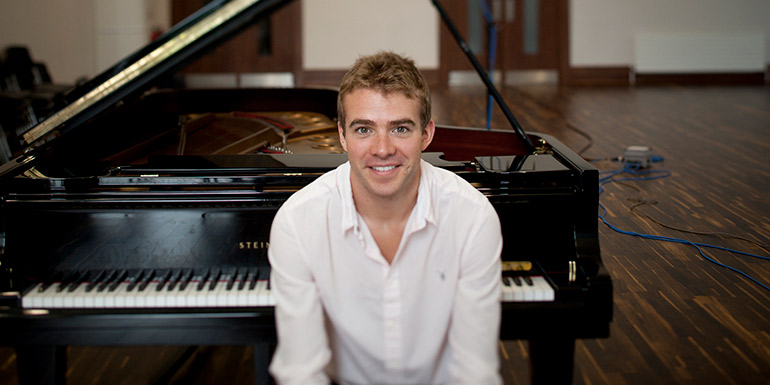 For the third of the 6 Summertime Concerts at Triskel, pianist Fiachra Garvey presents an all-Rachmaninoff solo piano recital.

First-prize winner of the 2012 Jaques Samuel Intercollegiate Piano Competition, London, Fiachra Garvey, ARAM, has performed in venues from the Fazioli Auditorium in Italy to London’s Wigmore Hall. He has also been a prize-winner at the AXA Dublin International Piano Competition (Brennan Prize and McCullough Bursary), the EU Piano Competition, Prague (concerto finalist), and the 3rd Soirées-Concours Internationales de Piano à Collioure, France (Audience Award). The National Concert Hall awarded Fiachra the “Rising Star” prize in 2011, which led to a series of concerto and solo debuts.

Recent highlights include the first classical recital at Google, Dublin, a series of solo and two piano recitals in Japan, a tour of China including giving masterclasses at the Beijing Conservatory of Music, as well as appearances at Spoleto Festival, Italy, Wexford Festival Opera, Brighton Festival, West Cork Chamber Music Festival, Bridgewater Hall, Manchester, and The Geneva Festival, Switzerland. Fiachra’s debut CD “For the Piano” under the RTÉ Lyric FM label “brings a deep and infectious enthusiasm, combined with insight and technical comfort.” (Sunday Times). His second CD is a live performance from Wigmore Hall.

When not performing, Fiachra loves nothing more than returning home to help on the family farm with the yearly lambing, dipping, shearing, harvesting and all the other elegant and refined activities on the farm! Fiachra feels this makes him a more inspired and fulfilled musician.