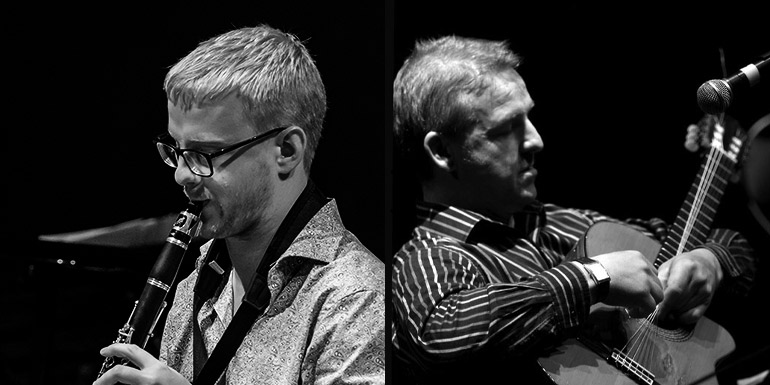 To open the 6 Summertime Concerts Series, jazz musicians Matthew Berrill and Mike Nielsen present a programme of new music and old favourites, all the while sharing a love of communication, spontaneity and fun. Drawing inspiration from jazz as well as the traditional Irish genre, this duo has creativity at its core, resulting in original sound worlds which are rooted in strong melodies and facilitate endless improvisatory possibilities.

Multi-instrumentalist Matthew Berrill hails from Headford, County Galway. He grew up surrounded by music, playing alongside his siblings and acquiring a rich and varied education in jazz, traditional and classical music from his parents, who are both music teachers. Following his secondary education, Matthew completed a one-year course in composition, funded by IMRO and run by Ronan Guilfoyle, at Newpark Music Centre, Dublin, and was awarded a Licentiate Diploma in Jazz Performance on saxophone and clarinet from the Guildhall School of Music, London. Subsequently, Matthew studied clarinet and saxophone at undergraduate level with John Ruocco at the Royal Conservatoire, Den Haag, The Netherlands, graduating with a BMus. (Hons.) Degree in Jazz Performance in 2008, and a master’s degree in 2010, with a focus on jazz composition. During his studies, he won the “Grand Prix” in the Tremplin Jazz Competition in Avignon, France, as part of the Christian Mendoza Group, and was twice awarded a place at the Banff International Workshop in Jazz and Creative Music in Canada, which lead to a collaborative tour with the international ensemble Sound Circus. He is an integral member of numerous ensembles in the jazz, improvised and traditional Irish music spheres, including Cuar, The Irish Memory Orchestra and Ensemble Ériu, with whom he recorded three critically-acclaimed albums for Raelach Records, Ensemble Records and Diatribe Records, respectively. Matthew is currently studying on the Master of Arts in Performance course at the Royal Academy of Music, London, on a scholarship. He is grateful for the generous support of the Arts Council.

Mike Nielsen’s performance interests comprise a wide range of contemporary, world music and interdisciplinary projects. Since returning from Berklee College in 1986, he has performed extensively in Ireland and abroad and has toured and recorded with Dave Liebman, Pat LaBarbera, Karnataka College of Percussion, India and Turkish percussionist, Okay Temiz, among others. Some of his performance credits include the world premiere of Ronan Guilfoyle‘s Concerto for Jazz Guitar Trio and Orchestra and Parabola for the RTÉ Concert Orchestra, which was conducted by Jim McNeely and featured Joe Lovano (live recording for RTÉ Lyric FM, 2000), as well as The Music of Duke Ellington, with the RTÉ Concert Orchestra, Dave Liebman, Richie Beirach, Anders Bergcantz and Norma Winstone (presented as part of Dublin 1991 European Capital City of Culture). In 2008, he initiated the first master’s programme in jazz performance in Ireland, which he co-ordinates at the Technological University of Dublin Conservatory of Music and Drama. Since 2006, he has been involved with the Sligo International Summer School and Jazz Festival as a tutor, performer and ensemble director. A study of rhythmic concepts led to workshops in odd-metre performance at Berklee College of Music, Boston, New School, New York and Tufts University, Boston. Consequently, he published a book on rhythm, which includes six original compositions (Precision Timing for All Instruments: The Ultimate Rhythm Workout, Schott, Germany, 2016).