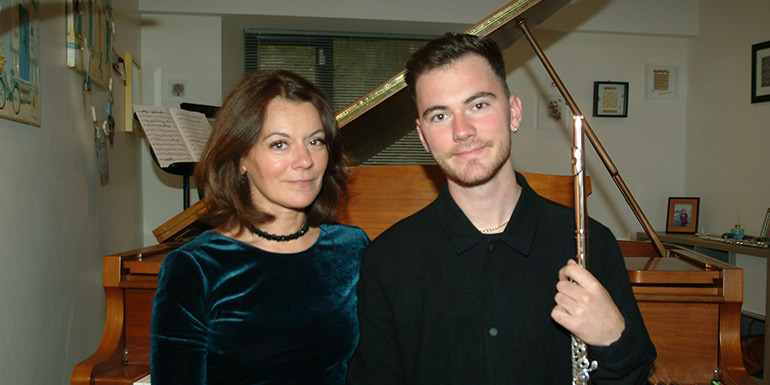 Flautist Cian Ducrot is in his 2nd year of a BA in Music Performance at The Royal Academy of Music in London, where he studies on a full scholarship with Samuel Coles. He began his studies at the age of nine at the CIT Cork School of Music with his mother, Sabine. At the age of eighteen, Cian was awarded a full scholarship to Wells Cathedral School, one of the UK’s top music performance schools, where he studied for two years before completing his A Level Examinations. Cian is a prize winner in many national and international competitions such as Feis Ceoil, Feis Maitiú, BFS Competition and Europa Fest International Competition.

French pianist and flautist Sabine Ducrot studied at the Conservatoire National Supérieur de Musique in Paris, where she was the first student in the history of the conservatoire to be accepted on two principal instruments, and qualified with the coveted Premier Prix. She has appeared as a soloist with some of France’s leading orchestras including the Orchestre de Paris, the Orchestre National de France and the Orchestre de Radio France. She has performed at major international venues, in particular in Paris, at Salle Pleyel, Théâtre des Champs-Elysées, Salle Gaveau and Salle Cortot. She has given live broadcasts for French radio and television and for RTÉ Lyric FM. Sabine currently lives in Cork where she is a lecturer in flute and piano at the CIT Cork School of Music.

Please present your ticket to avail of these offers