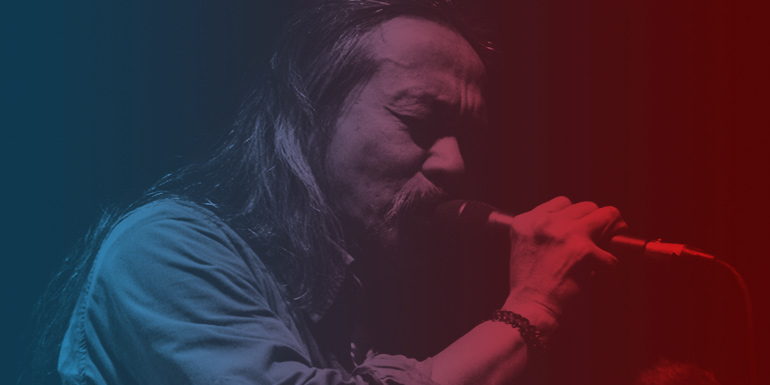 The lightning-rod of good vibes and creator of new musical communities is back! Mystic pop-star pinup of Can! Nomad shaman of the Damo Suzuki Network!

Come and be part of Damo’s non-stop round-the-world sonic carnival, the Never-Ending Tour: unique music created in the moment, straight to the heart.

We are very proud and privileged to be once again hosting the truly legendary Damo Suzuki for another journey into space. If you’ve seen his psychedelic vapour-trails before you will know to expect the unexpected. If you have not seen him before, then you must fix this grievous situation immediately!

The panel of committed and highly competent groove professionals who will be joining Damo onstage include producer Jimmy Eadie, dj Poppy Lloyd, This is How We Fly’s Sean Macerlaine, Beautiful Unit’s Brian Mooney, 3epkano’s Matthew Nolan, drummer Bryan O’Connell, producer Steve Shannon, composer David Stalling, and a revolving cast of many others.

Damo Suzuki visited Ireland for the first time as a young traveller in the 60’s. He returns as a veteran of over a hundred albums, hundreds of live bootlegs, and thousands of shows, still travelling.

He is most famous for his work as a member of Can on their most highly-regarded run of albums.

But since then Damo has been on his equally ground-breaking Never-Ending Tour, gathering together musicians from every corner of the globe to share a moment of communication with each other and with the audience. In fact, the focus is on the communication – the participants are called “Sound Carriers”, rather than musicians. The music, or “instant composition” as Damo refers to it, means that there are no egos on stage, just concentrated listening, and sharing. The music is free – it can go anywhere, depending equally on the sound carriers onstage and the audience. There are always surprises. And afterwards, if you are lucky, a hug for everyone in the room from the man himself.